Finally I can devote myself to blog articles and exhibition reviews once again. Last month I had the chance to visit the Frieze Sculpture installations at Regent’s Park, in the heart of London.

“Artists of different generations and from across the world – including a strong female contribution – will come together and explore multiple concepts, spanning political and architectural ideas, animal forms and material experimentation.”

Among the new works by female artists that impressed on preview day were the colorful sculptures by Indian artist Bharti Kher, rising star Rana Begum, who is based in London, and the US artist Virginia Overton. A flock of Tracey Emin‘s bronze birds have also flown in.

Rana Begum, No. 814: Rana Begum’s post-minimalistic vocabulary is not only influenced by minimalist art but also by modern architecture and urban structures. Three-dimensionality is an important aspect to her multi-part wall-works that offer a multitude of perspectives to the viewer. Begum’s minimal sculpture at Regent’s Park in London depict four panels of coloured glass, which allow a merging of the colours through sunlight. For Rana, the sculpture reflects her childhood experience in Bangladesh of being in a mosque and experiencing calm and exhilaration as light entered the room. 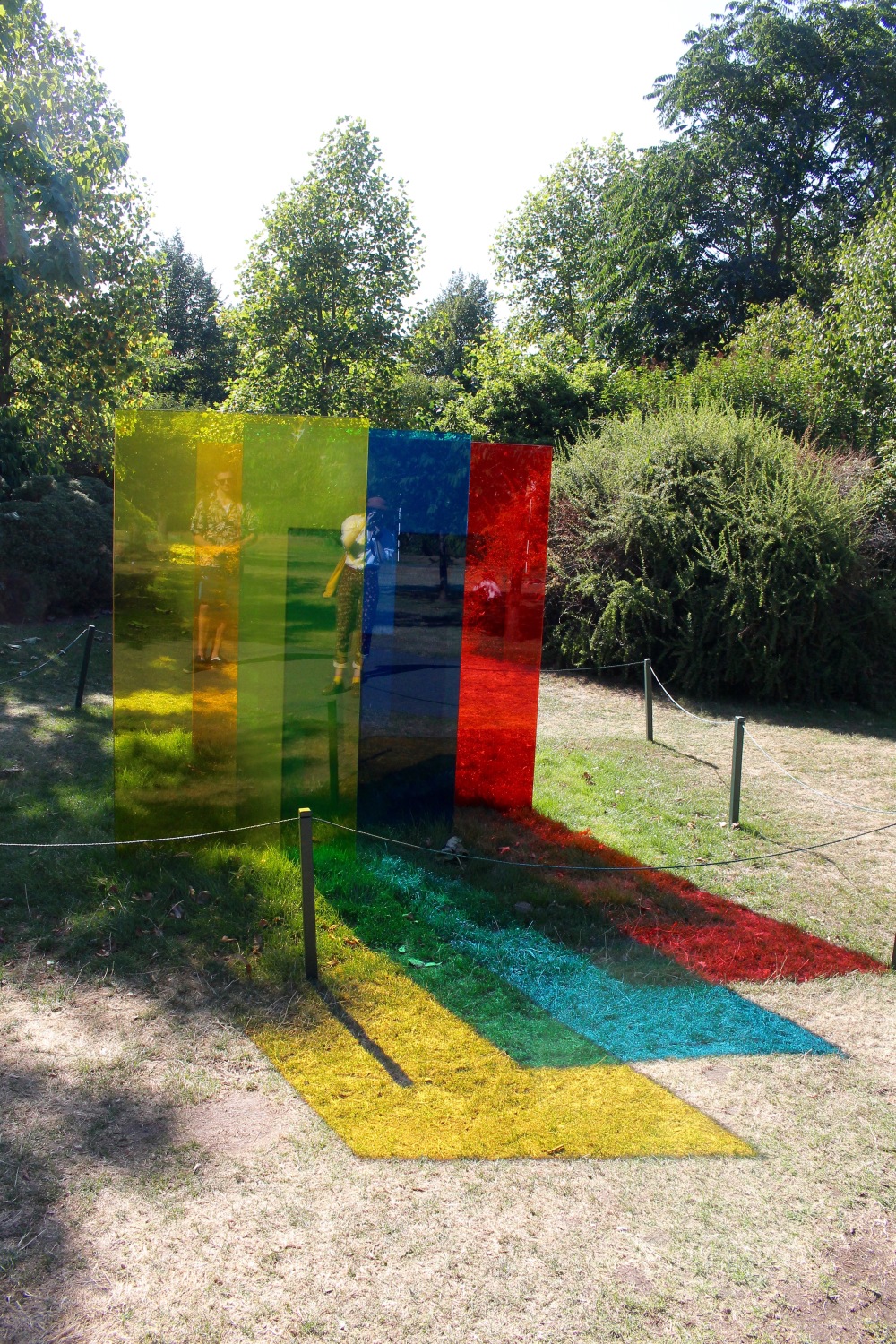 Virginia Overton, Untitled: Raised in rural Tennessee, for as long as she remembers, Overton has been familiar with farm and other machinery. Her work at Frieze Sculpture is filled with pipes of various metals, forming a robust sculpture that ripples when the sun hits. 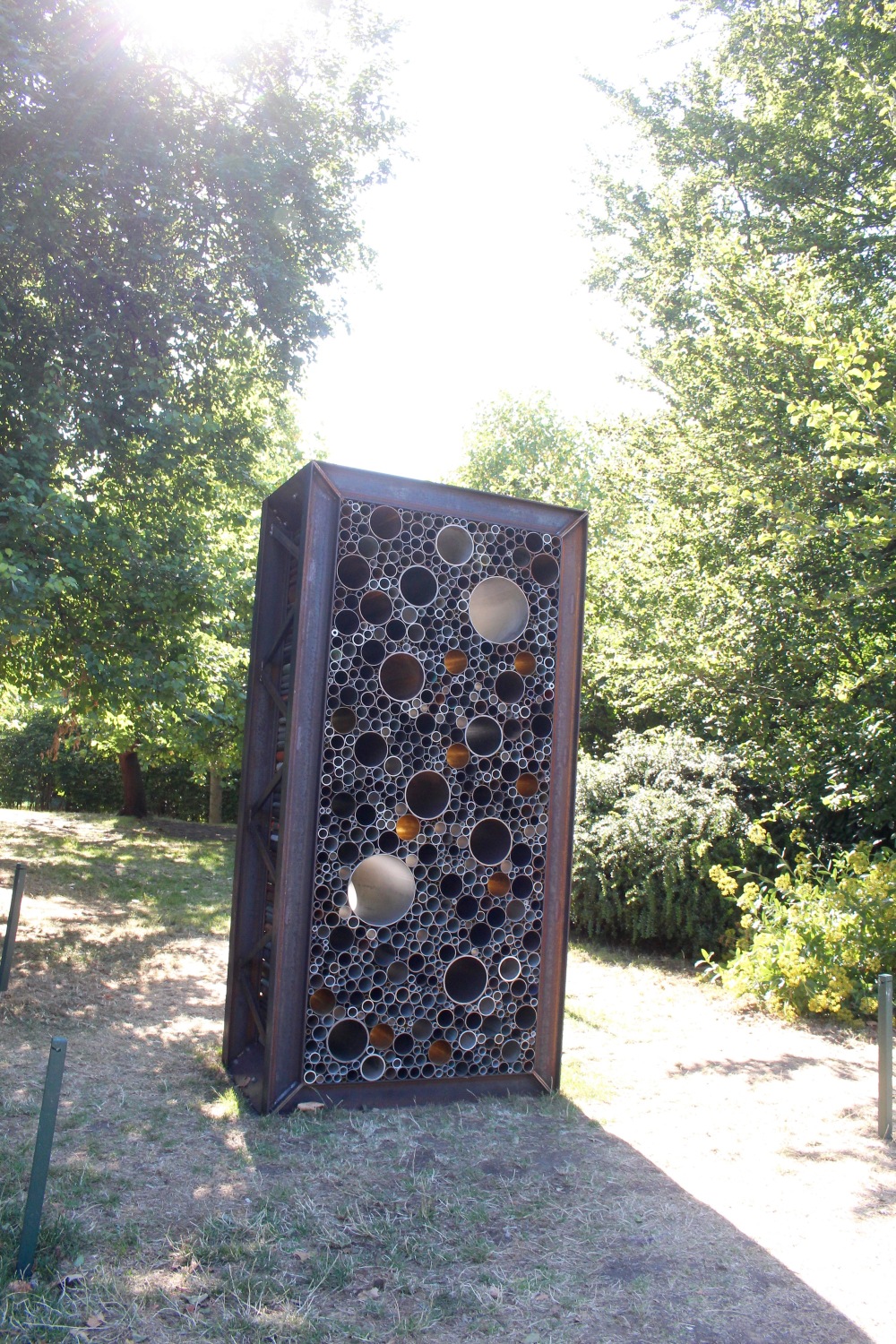 Dan Graham, London Rococo:  One of the highlights at Frieze Sculpture 2018 is certainly Graham’s large-scale pavilion. His work often blurs the lines between art and architecture. The work on display uses instruments of reflection – both visual and cognitive – to highlight the voyeuristic elements of design. A hybrid by nature, the pavilion operates as a quasi-functional space and an art installation. By deploying reflective glass and mirrors, the traditional viewer of the work is turned into a spectator of a performance in which he or she is implicated in the complicated act of looking. 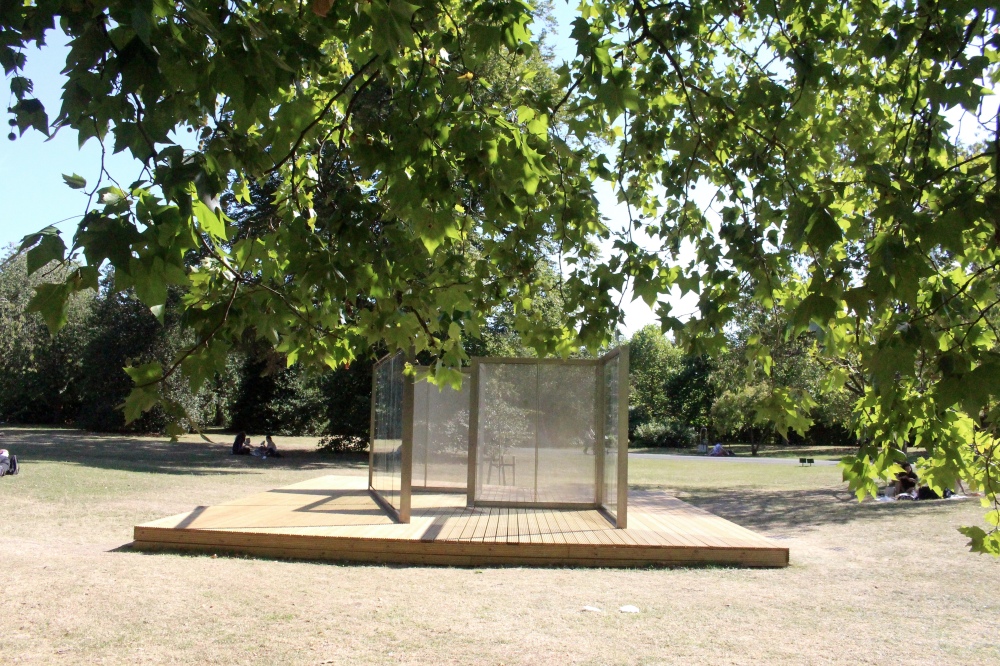 James Capper, Treadpad B (two pairs): James Capper has developed a wide variety of sculpture components which are attachment parts for his large mobile works but can be shown and viewed autonomously. Removing himself from the utilitarian lexicon of professional engineering and the deterministic narratives of evolutionary biology, Capper’s functioning works stand as an aesthetic representation of the complex character and reciprocal relationships between technology, organism and craft. 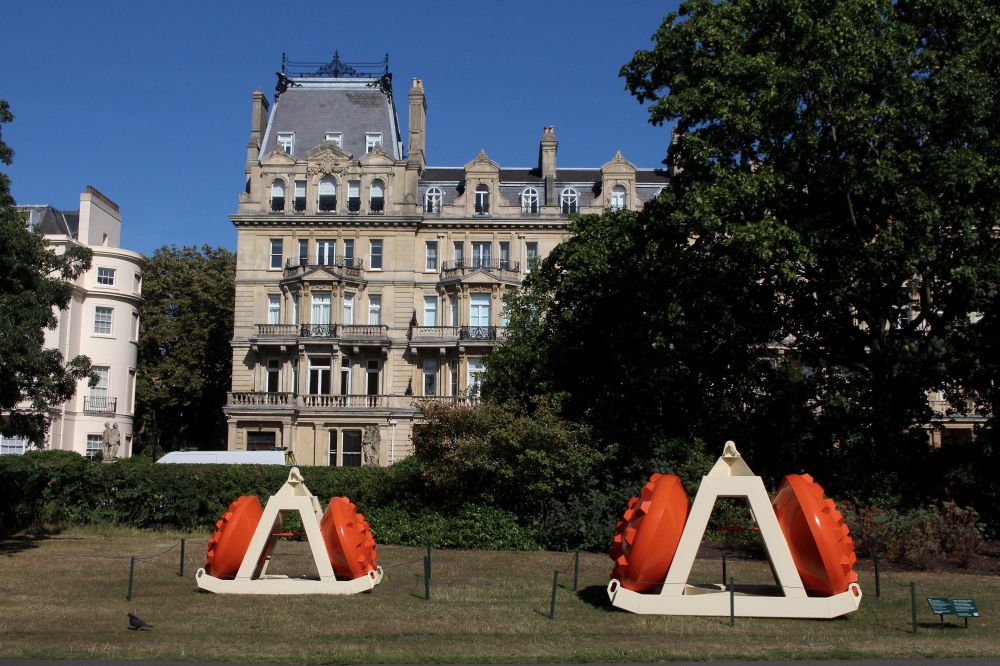 Richard Woods, Holiday Home: Holiday Home is a brightly painted house with its roots in cartoons, pop-imagery and archetypal children’s illustration. This perfect but unusable house plays with ideas about our home improvement obsession and aspirations – in central London specifically drawing attention to those who have and those who have not. 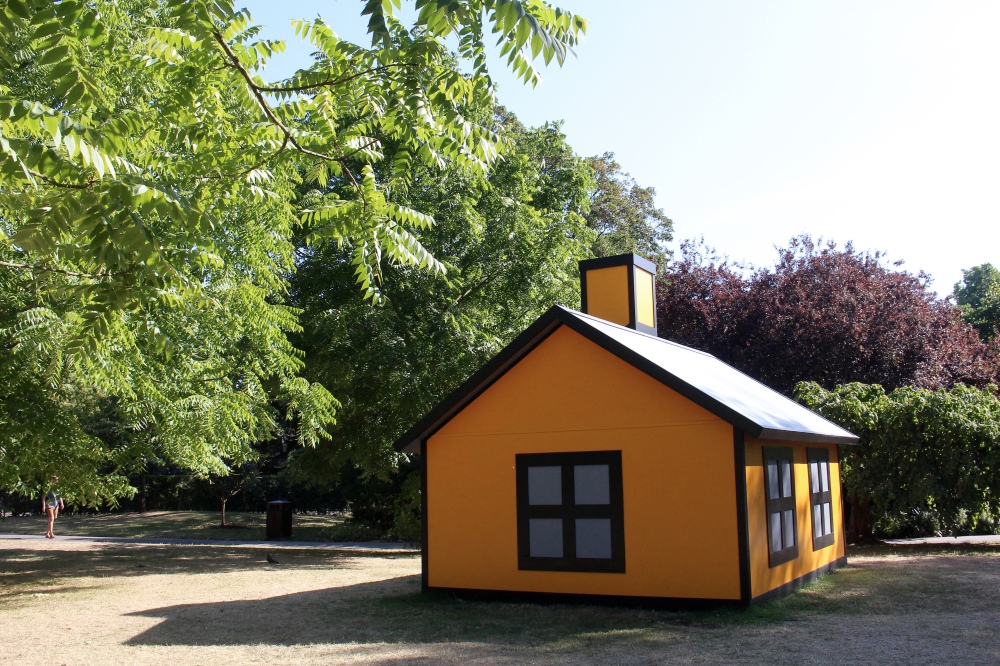 Michele Mathison, Parallax: With Parallax, Mathison draws attention to broken urban infrastructure in Harare and Johannesburg as a form of replacing public sculpture, memorializing decay and the collapse of the civic. With their function as a light eroded, they become more clearly aesthetic objects, as well as signifiers of a break down in the areas they are found. And they are beautiful, in copy as in the original, with care in their design and construction: tapering elegantly as they rise from the base to the lamp, their curved necks forming graceful parabolas. These are reconstructions of street lamps, rather than found objects, made using the same materials and techniques, allowing the artist to make hero versions of the ubiquitous objects. With only a couple of working lights in Michele’s construction, held aloft by the other lamps clustered in tottering solidarity, raising one of their own aloft. 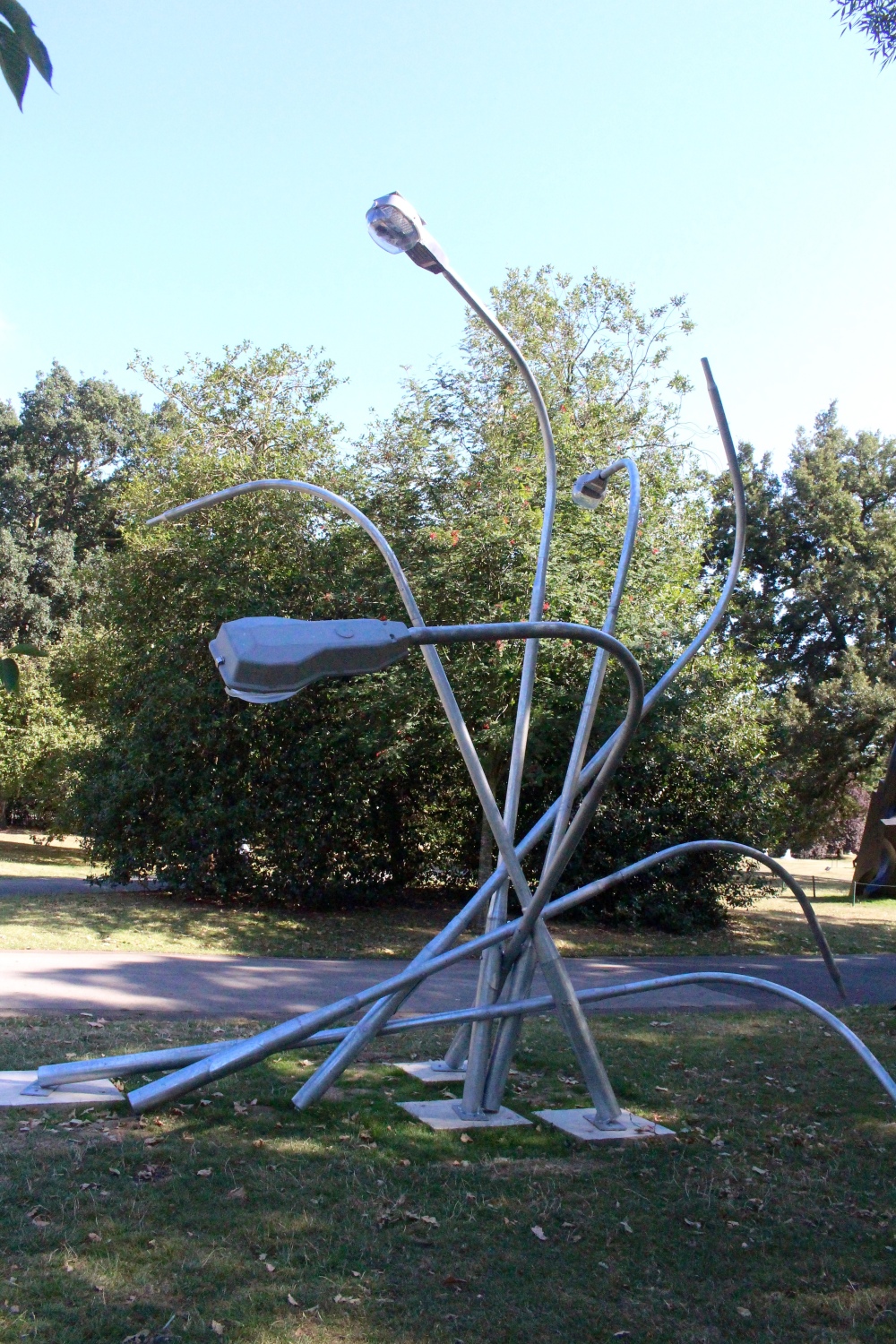