Spending the last few days in Venice allowed me to finally visit the 58th Biennale di Arte which is only open until November 24, 2019.

Both exhibition spaces, the Giardini Pubblici and the Arsenale di Venezia, are dedicated to the title “May you live in interesting times” which President Paolo Barrata linked to challenging or even menacing times but it could also be an invitation to see and consider the course of human events in their complexity. This kind of invitation appears to be particularly important in times when too often oversimplification seems to prevail, generated by conformism or fear.

“I believe that an exhibition of art is worth our attention, first and foremost, if it intends to present us with art and artists as a decisive challenge to all oversimplifying attitudes.”

While I was visiting the international exhibition, I noticed a certain ambition towards depicting human failure as well as human tragedies including acts of violence, slavery and suppression. My artist guide is based on the works of art whichever managed to capture the pivotal idea of La Biennale this year including many diverse approaches towards the human way of living life.

Teresa Margolles // La Búsqueda (2), 2014 // Teresa Margolles trains a feminist lens onto the brutalities of narcoviolence that pervade her home country of Mexico. In “La Búsqueda” (the search), she recorded the sound of the train that vibrates uneasily in the gallery space. The sound rattles the installation’s glass panels – taken from the city centre – in their free standing wooden frames. Covering these panels are tattered posters featuring the faces of missing women. An epicentre of the ongoing femicide along the US / Mexico border, Juárez is home to many unsolved murders of female factory workers and students. The faces in the flyers are both distinctly individual but at the same time evoke a wider emergency and implicitly call for a collective public response of mourning and action. 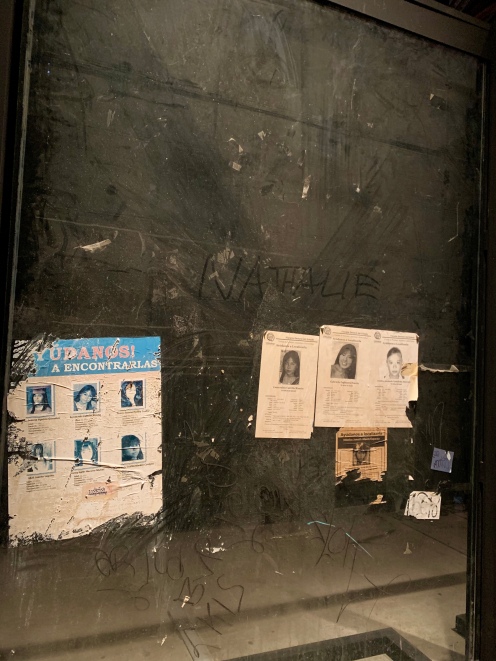 Stan Douglas // Scenes from the Blackout (2017) // Stan Douglas often explores what he calls “speculative histories”, picturing pivotal moments when events in the world might have taken a very different turn. For “Scenes from the Blackout”, Douglas imagined the physical effects of a total loss of power in present-day New York and how people would behave in such an emergency. A panoramic view of an almost entirely blacked-out cityscape is followed by scenes of resourcefulness – a solitary woman trapped in a lift makes a candle out of a tin of vegetable fat and a shoelace – and various degrees of misbehaviour: looting, theft and mayhem. Douglas considers photographs to be “like films without moving images” and creates them in much the same way as a scene for a movie, each image is carefully scripted and staged. 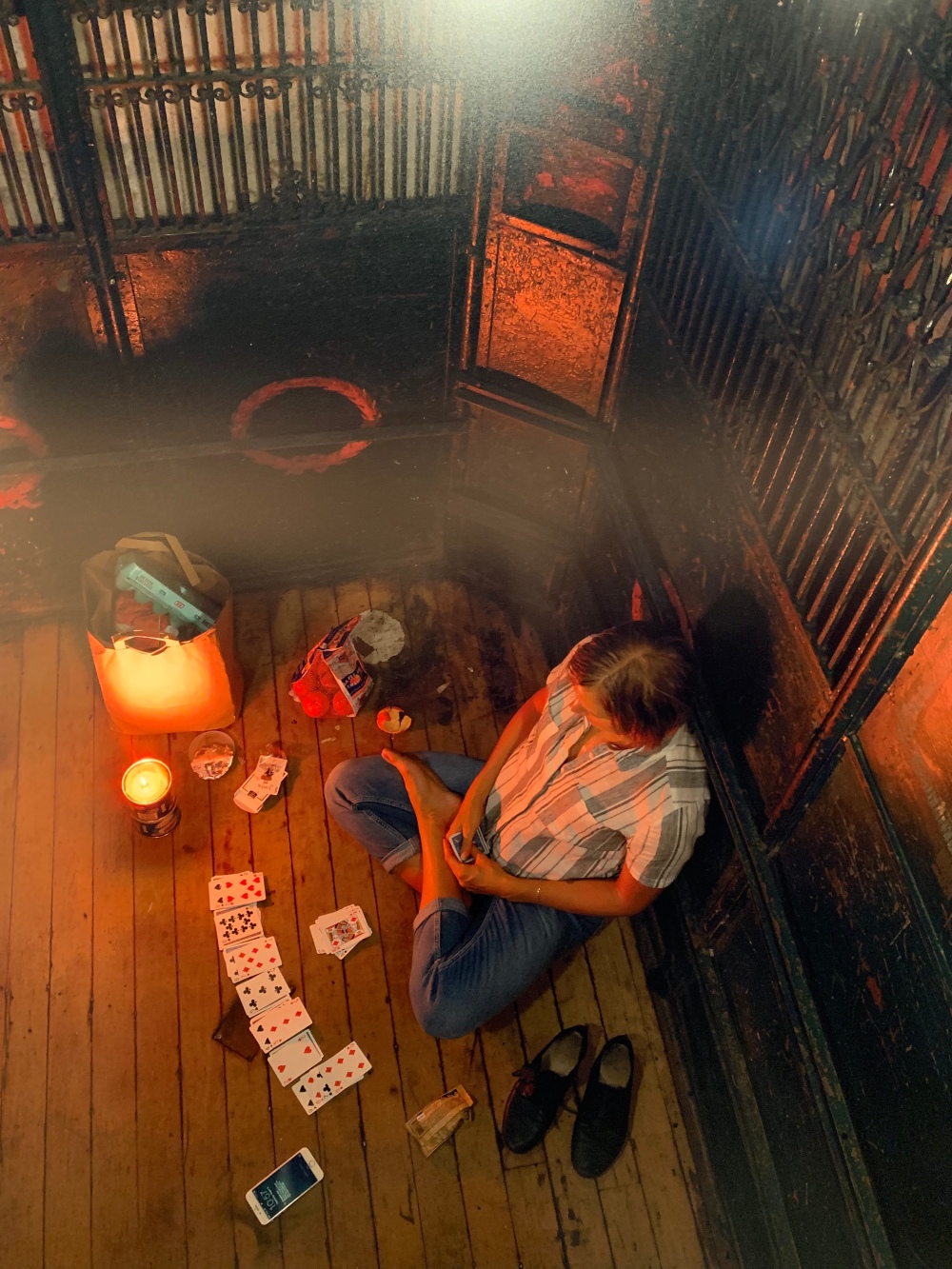 Jill Mulleady // The Fight was fixed, 2019 // Jill Mulleady’s practice shifts between close observations of everyday reality and highly elaborated imaginary worlds. References to historical painting, in this case Edvard Munch’s “Frieze of Life” are put into communication with images taken both from popular culture and personal life, creating a strange feeling of merged, multiplied temporalities. “The Fight was fixed” portrays a chaotic, urban world of violent street scenes. Even improvised children’s games suggest a destabilising logic of competition that nobody finally controls. This frieze extends horizontally like a city street, channelling and mobilising subjects who remain fundamentally homeless and ungovernable.

Sun Yuan and Peng Yu // Dear, 2015 // Sun Yuan and Peng Yu’s installations often involve the staging of visceral, intimidating spectacles. The act of looking on the part of the audience is a constitutive element of their recent works. Like an exhibit in a history museum, “Dear” presents a white silicon chair behind Plexiglas barrier. The object is loosely based on the imperial Roman chair featured as a component of the statue in the Lincoln Memorial in Washington D.C.. The chair is kept company by a rubber hose that violently whips around the surrounding space in response to blasts of highly pressurised air. In between these periodic eruptions of violence, the chair sits inert again almost waiting until the assault recommences. 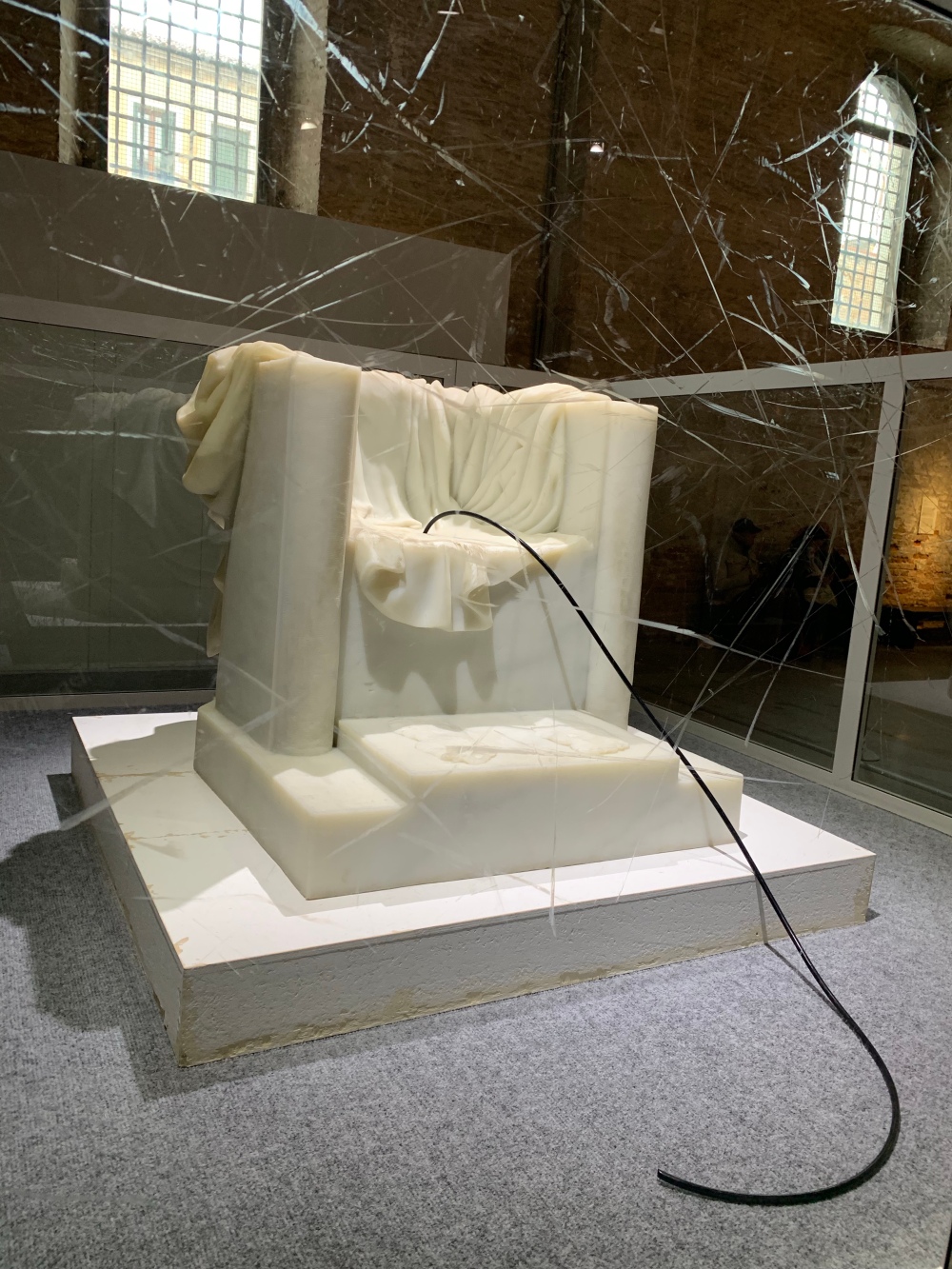 Christine and Margaret Wertheim // Crochet Coral Reef, 2019 // Christine and Margaret Wertheim’s installation sits somewhere between sculpture and a device for learning, a botanical, biological model. Such three-dimensional models were once made out of glass; in the Wertheims’ project, the forms are made in crochet. Yarn, thread, wire, old video-tape, beads, one stitch upon another, all combine gradually to make a series of coral reefs. An elegant alliance of science and art, the “Crochet Coral Reef” reflects the twins’ biography: Margaret, trained as a physicist, is an acclaimed science author; Christine, a poet and former painter, is a professor of critical studies. Their work is something that takes and represents time and imagination, and non-hierarchical collaboration. To date, more than 10,000 participants have collectively crocheted over forty Satellite Reefs in different cities and countries.

Alexandra Bircken // Eskalation (2016) // Alexandra Bircken’s practice is built around the human form. Her works incorporate an unusual range of materials, from manufactured items such as silicon, nylon tights, weapons, and machinery, to organic materials including wool, leather, branches, and dried fruit. In the Arsenale the artist exhibits the visceral, apocalyptic and dynamic installation “Eskalation”, a dystopian view of what the end of humanity might look like. Forty figures, made from calico dipped in black latex, are suspended from ladders that extend to the ceiling. But where are they going? The sheer verticality of the work, the figures ascending to the top, arriving at obstacles and falling, invokes an upward struggle between polarities: heaven and hell, success and failure, hope and despair. As the title suggests, the drive to climb higher is the only certainty, and yet sustaining exponential growth must come at a cost. 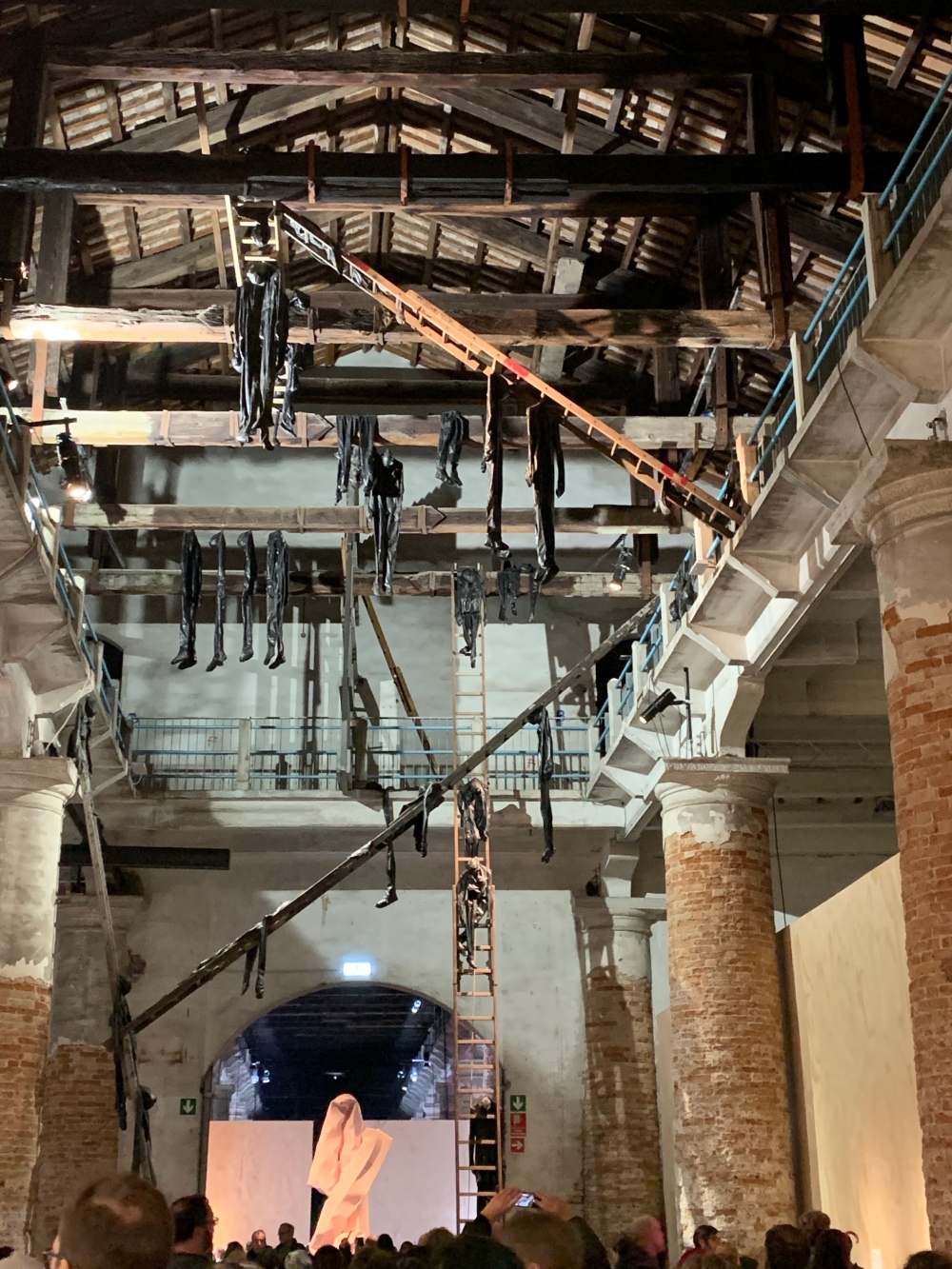 Andra Ursaţa // various works, 2019 // The artist has described her glass sculptures, created from fragments of female figures as a “tragicomic contemplation of life”. The sculptures, which were initially constructed from studio trash and old clothes, undergo a multi-step process. They are scanned and manipulated in a 3D modelling program, then a mould is made of each printed part, which in turn is cast in wax, and finally in glass. Partly filled with liquid, they are reminiscent of fancy liqueur bearing the face of the artist who wears the head of an alien as a babushka. Violence is inherent in many of these works, but we also feel a discomfiting sense of ambiguity – are these beings victims or perpetrators? 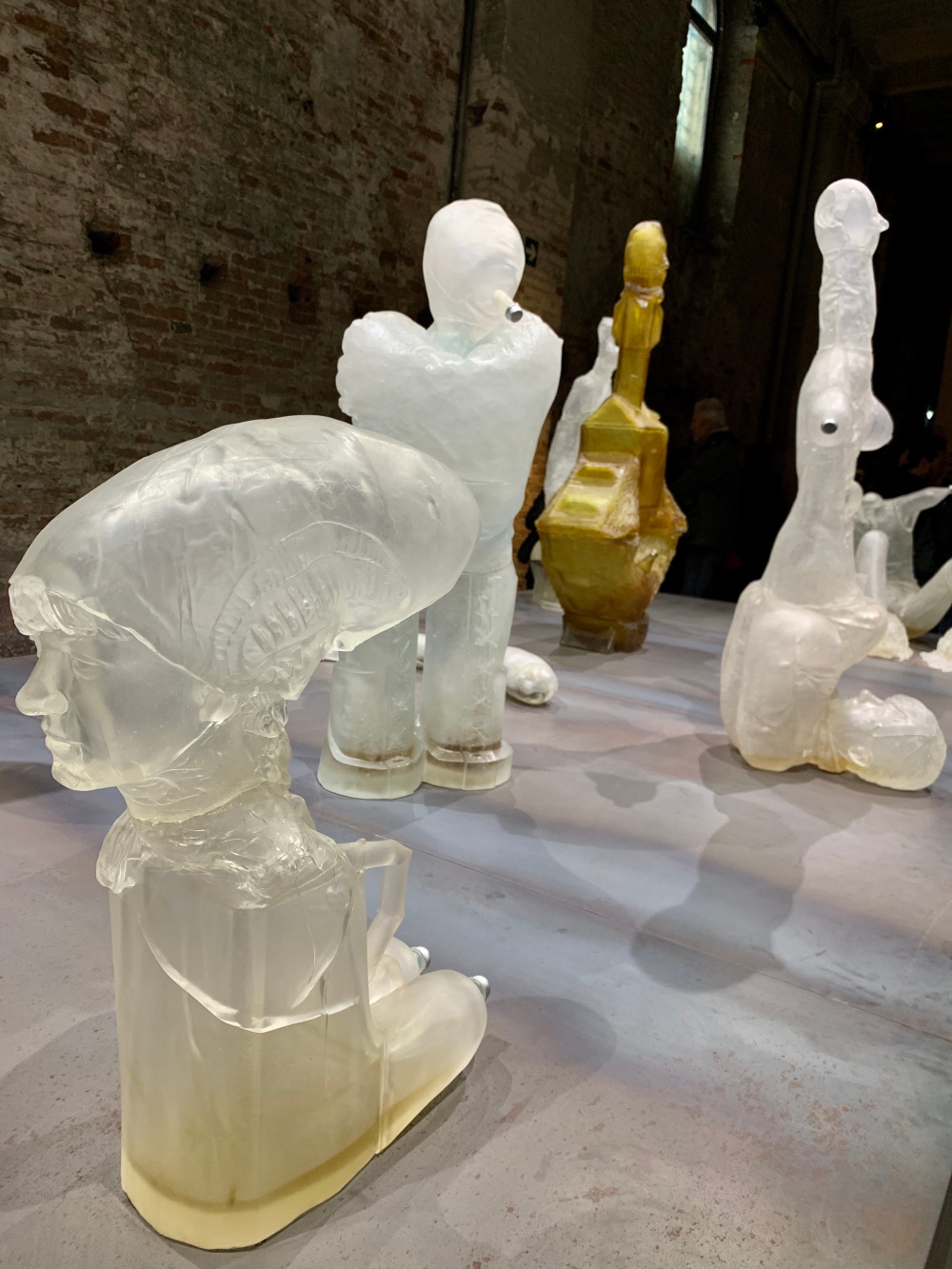 Ed Atkins // Old Food, 2017 – 2019 // Ed Atkins makes all kinds of convolutions of self-portraiture. He writes uncomfortably intimate, elliptical prophesies, draws horrible caricatures, and makes realistic computer generated videos that often feature male figures in the throes of unaccountable psychical crises. In the Arsenale, the installation “Old Food” is wadded with historicity, melancholy, and stupidity. Here, Atkins has expanded his emo terrain, tempering affecting autobiographical figuration with broader issues and citations. The drawings that constitute Bloom (numbered one to ten and showed in the Central Pavilion) feature tarantulas disembarking tentative hands or otherwise perching on a posed foot, each with the shrunken head of Ed Atkins where the spiders’ abdomen should be. Wreathed in arachnid hairs, Atkins’s face breaks the fourth wall and gawps at us, wearing an ambivalent, questionably conscious expression.

Mariana Telleria // The Name of a Country, 2019 // The Argentina pavilion is a punk, Frankensteinish bestiary installation that flaunts a high-fashion collection attitude condensing the sediment from Mariana Telleria’s world. The artist traces a highway with an infinite number of linguistic lanes, activating confusion – mixing things together, building monsters – and sustaining viewers’ awareness in a continual state of transit, lost in the pitch dark back and forth between what they see and the need to attach meaning to it. The procession of sculptures is presented as a support for the intuitive transformation of things; an archive of desacralized meanings where religious iconography, rubbish, fashion, spectacle, and nature share the same horizontal hierarchy.